I just thought I’d jot a bit down about what’s been happening with our rear suspension, someone may be interested. Our vehicle carries a good deal of weight in pretty awful conditions for a great deal of the time so rear suspension where most of the weight is carried cops a real hiding.

Land Rover Defender 130's (longest wheelbase version) come from the factory with a dual rear coil spring set-up. The main coil has a smaller diameter "helper" inside it. It is a neat little system that has proven itself on our vehicle for many desert journeys. The best feature is its simple design and low maintenance.

After the 2009 season had finished we were due to renew springs as they don’t last forever. I was looking at replacing both coils, the main large coil and the smaller inner helper. Instead of the inner helper coil I decided to have a look at a different option, airbags. Initially I had been very wary about airbags, the stories that we heard weren’t good and as a tyre repairer I’m naturally suspicious of any rubber vessel with air pressure in it.

However one thing we have learnt about 4WDs and the gear that gets bolted to them is not to trust the rumours you hear, take note, remember, have a think about it logically but don’t let them put you off entirely. I fully suspect that the "stories" have come from poor fitment or poor maintenance, as is the case with at least half if not more of the problems in remote country in my experience. The truth is I get annoyed when people condemn something when the cause of the problem is not related to the quality or design of the gear in question but the handling of it.

Cutting a long story much shorter I fitted new air bags (quite a simple job) into new rear coils for the 2010 season. I fitted them for a couple of reasons;

Four desert trips and some 22,000 kms later we came home and to be perfectly honest I hadn’t noticed much difference in the vehicle performance or shock absorber heat etc. Everything was much the same as far as I could tell but the rear suspension did sit a little higher, which was good. 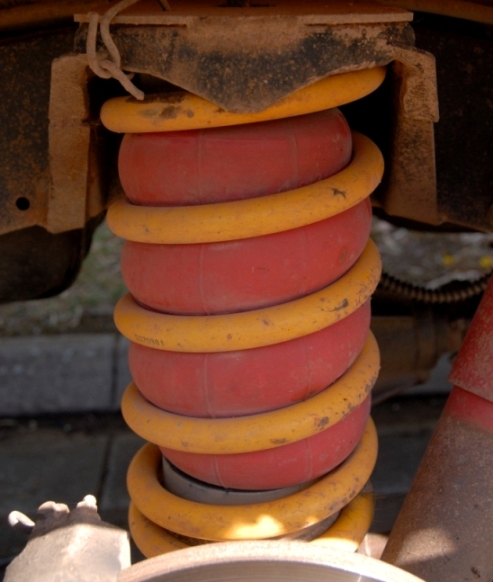 Obviously this is the air bag fitted in our rear coils
The bit of wire (top left) is my spring over-travel retaining device!!

I did an inspection of the airbags and springs before the 2011 season started and could find nothing wrong. Our first trip was a 28 day Canning Stock Route trip so we had a little more tucker, fuel etc than normal. The air bags were put up to their maximum of 30psi. Over the next 6 months or so we completed another 5 trips & 25,000 kms without incident. The bags were reduced in pressure according to the amount of gear for each trip.

Once again I couldn’t see or feel much difference with the air bags fitted and I was also keeping an eye out for cracking in the suspension mounts & chassis, I wasn’t sure if the airbag was increasing stress or reducing it in the suspension as it worked. I still don’t really know but nothing has moved or broken so all I can do is keep an eye on everything. The truth is I do anyway. In regard to spare parts for the airbags, I carry a full set of new gear; 2 bags, lengths of airline and fittings. Better to be safe than sorry.

Over the years a number of our customers have asked about increasing the height of their rear suspension as they have found that fully loaded for a long range remote trip the standard springs or old aftermarket springs are no longer good enough. Their vehicle sits low in the rear or has limited travel for the rear suspension (distance between axle housing and rubber bump-stop). There are only a few ways extra suspension travel can be gained, obviously new or taller springs (whatever type they may be), some sort of extra "helper" spring or airbags. For customers with late model vehicles I usually urge them to look at airbags for a couple of reasons;

Problems we have seen

In 2008 I tried to plug a hole in an airbag/leaf spring set-up and it just didn’t work. The hole was caused by the top fitting plate being poorly shaped. A corner of the plate under high compression of the bag was able to touch the air bag surface. In time it rubbed a hole in it. We re-shaped the plate, fitted a new air bag and the problem was solved.

On that same trip in 2008 we had another vehicle with airbag problems. That problem was caused by lack of maintenance. The heavy rubber stopper holding the bag inside the coil spring had failed due to age and wear, popping out & letting the bag out as well. It was obvious that they hadn’t been looked at for many years. Not the fault of the air bag.

Apart from those two incidents I’m struggling to remember another air bag problem in the last 7-8 years, for our style of travel the air bags seem to be a good reliable way of helping a vehicle's suspension.